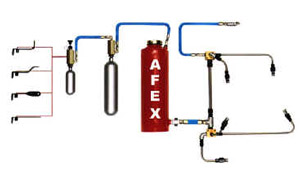 In an automatic system, the closing of any one of the heat detectors will cause an electrical actuation of the system by discharging an explosive squib. The force from the squib powers a puncture pin which pierces the seal of a compressed nitrogen cartridge. The released gas flows to the extinguisher cylinder. Manual actuation is accomplished by pulling a safety pin and applying force to the push knob on a mechanical actuator assembly. This also forces the puncture pin into the seal of a compressed nitrogen cartridge. Mechanical actuators should be located in the operator cab and on the outside of the vehicle near the operator egress path.

The pressurizing gas enters a tube at the top of the extinguisher. The gas passes through perforations in this tube, which extends to the bottom of the extinguisher. In so doing, the gas fluidizes the powder, even when severely packed. As the gas increases the pressure in the cylinder, it ruptures the bursting disc in the discharge outlet at the bottom, forcing the powder through the distribution network. The distribution network consists of stainless steel tubing and/or hydraulic hose. Finally, the dry chemical is disbursed through cone spray nozzles, which permit the broad distribution of the agent that is necessary for a total flooding system. These nozzles are protected by a spring loaded cap.

Contact Us for a Quote
Internet Marketing Solution & Design by Cazbah