Monroe Extinguisher Company, Inc was incorporated in 1972 by John B. Agness, as a fire protection sales and service company. In 1975 Monroe earned its Factory Mutual Approval on its recharge facility. Becoming one of two companies in New York State to hold this approval. In 1976, after Mr. Agness passed away, management was transferred to Thomas J. Curtin. Mr. Curtin had been an employee of the company since 1972 and was certified for Ansul and Walter Kidde pre-engineered fire systems. In the late 70’s the company continued to expand throughout Western New York, servicing hand portables, pre-engineered fire systems and Halon engineered extinguishing systems.

In 1980 Monroe began to install Commercial Kitchen Ventilation Systems. The Market was changing and Restaurants demanded a knowledgeable company that could install Hoods according to the latest NFPA 96 regulations. Monroe worked closely with a metal fabrication company (Master Kitchen Equipment) to design prefabricated Hood Systems that would meet local codes, Insurance Services Offices regulations, and NFPA. 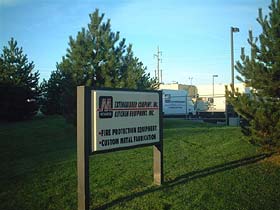 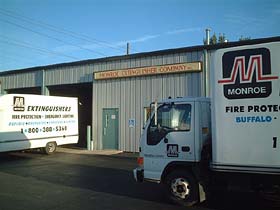 As the 90’s began, new products came along. From Great Lakes Chemical we chose FM-200 as the clean agent replacement for the Halon Systems market, and from Dupont we chose FE-36 for the halon 1211 portable market. Both gases have turned out to be the proven choice to replace the ozone depleting halons we had used in the past. Monroe Extinguisher installed thousands of these in the 90’s, and has become one of the leading distributors of Ansul and Kidde special hazard equipment.

In 1996 Monroe Extinguisher moved to a new facility joining the Kitchen and Extinguisher companies under one roof. This 24,000 square foot, Factory Mutual Approved facility was equipped with all new Galiso, state of the art Hydrostatic Testing equipment and allowed both companies ample room for future growth and synergy.

As the 90’s came to a close, special hazards such as hospital environments, clean room manufacturing and telecommunication facilities required improved portable fire protection which included Ansul’s Clean Guard FE-36 clean agent fire extinguishers and Amerex’s Water Mist fire extinguishers.  Also, at this time came the Ansul K-Guard fire extinguisher. This was the first extinguisher from Ansul, manufactured for the sole purpose of the “K” class fire. The K rating is based on fire testing on commercial fryers, the toughest fires to extinguish in a restaurant or commercial kitchen. 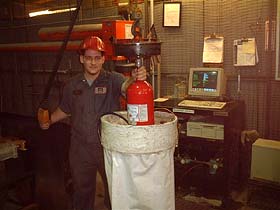 Now as we enter a new millennium, Monroe Extinguisher Company is still the leading distributor for fire safety equipment in Western New York. Our personnel are still some of the same people that started the business with Mr. Agness back in 1972. As our Corporate Mission Statement proclaims, we strive “to be the leading high quality provider of: fire protection systems, equipment, and service in the North Eastern United States. For our customers, we are committed to always meet or exceed expectations for quality, service, and delivery. For our employees, we are dedicated to growing the Company to provide job security and reward based on performance.”

If you require further detailed information, or have a fire protection application, please do not hesitate to contact us.